Kisamba Primary School is one of the few government-aided primary Schools in Bugoye Sub County, Kasese District. Started in 1986, the school has a total of 859 pupils, of which 388 are girls and 471 are boys. However, for the over two decades that it has existed, the major challenge has been the poor performance.

Johnson Basolene, a teacher at the school says that even though their pupils are bright, they haven’t been getting enough time to revise their books or go for preparatory studies as pupils in other schools do.

He adds that most pupils come from families without electricity in their homes and this limits their revision in the night and very early in the morning.

Basolene notes that the lack of electricity was not only affecting the pupils’ revision time.
“Most of teachers were also reporting late on duty. They were staying far away from the school premises because there was no electricity”, he said.

As a result, he adds that pupils were often cheated their learning hours. In some instances, teachers would simply not show up. This eventually affected the completion of the syllabus leading to poor performance of the pupils in National exams.

It’s at this point that World Wide Fund for Nature (WWF) with funding from European Union (EU) intervened with a solar system to reverse this situation. The system was installed at the school in July last year.  Since then, teachers and pupils have remained hopeful.

Vicent Kule, also a teacher at Kisamba notes that parents and the school administration have since agreed on remedial classes for pupils in the upper classes.

“Pupils from P.4 up to P.7 these days return to school to revise with teachers.  They come at 6pm and go back home at around 9pm. The solar light has allowed us this additional reading time.

Jenipher Biira, a Primary Seven pupil says that she is now hopeful that she will perform better in PLE because of the extra classes.

“We don’t read while at home. Coming here for remedial classes and preparatory studies has helped me improve on my performance and no doubt, I will get a first grade,” she says.

These extra engagements between teachers and pupils have also allowed for the completion of syllabus. The teachers are now staying in the school quarters.
“We now have full-time electricity. I can mark pupils’ examination scripts even at night, I can scheme and plan for lessons at night, I no longer pay to charge my phone,” Basolene adds.

With security lights, the safety of the school, its property and pupils is also guaranteed.
The head teacher George Masereka, says that with these improvements in school, the pupils’ enrolment has also shot up.

The school’s administration is now planning to purchase a printer, computer and photocopier so that they can start printing their own exams instead of buying from distant places outside the school.

With reliable solar energy at Kisamba, the future is bright. 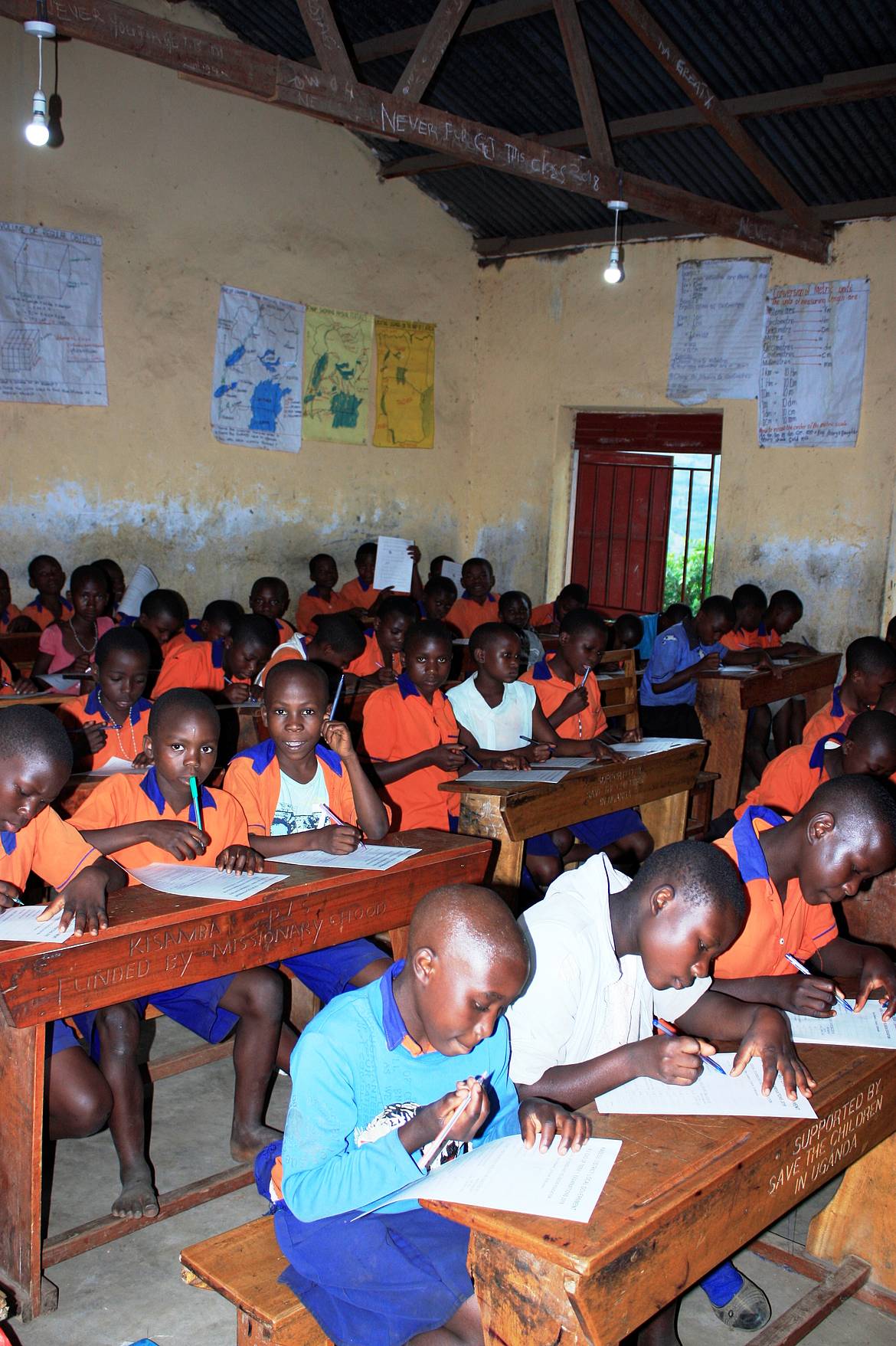 Kisamba P/S Pupils during their end of term exams