Last week, WWF in Uganda together with her partners launched a tree planting campaign dubbed ‘Pet a tree’. The Campaign is aimed at mobilizing Ugandans not to just love and plant trees but to also nurture them as pets.


The launch that took place at Uganda Wildlife Education Centre (UWEC) was graced by the State Minister for Tourism, Wildlife and Antiquities, Hon Bahinduka Mugarra Martin. Others were; the Executive Director at UWEC, James Musinguzi, Minister of Tourism of Tooro Kingdom among other dignitaries.
All officials petted and planted trees to as a symbol of kick-starting the campaign.
According to Bismark Amumpiire, Coordinator Africa Tourism and Environment Initiative (ATEI), the campaign will instill a culture of planting trees as a prestigious noble cause alongside raising awareness of the importance of planting and saving already existing trees to the society.
While speaking at the launch, WWF Country Director, David Duli applauded officials from ATEI for the initiative and pledged full support towards achieving the objectives of the campaign.
David noted that petting Flora and Fauna, was Africa’ traditional way of conservation as every Clan had/has a Totem that in one way or the other relates to nature.
“The concept of using totems demonstrated the close relationship between humans, animals, plants and the lived environment. Each clan conserved their totems, they considered them friends,” he said.
David also added that many natural disasters arise from environmental degradation and collective efforts to reverse the current situation are timely.
“We need a policy to regulate environmental activities. We must leave this country better than we found it, otherwise, our children will never forgive us," he said.
Minister Mugarra pledged government total support towards the success of the campaign noting that president Museveni is determined to support efforts by the youths that will help mitigate effects of climate change and restore degraded land-based ecosystem.
Over the years, WWF in Uganda has boosted the tussle against deforestation with the establishment of partnerships with state and non-state actors to improve the forestry cover through plantation of trees both in public and private institutions.
In addition to culture and religious institutions, the pet a tree campaign targets schools in an effort to increase forest cover in the country to reduce the impact of climate change.
WWF supports the Education for Sustainable Development (ESD) program in a number of schools and therefore an opportunity of partnering with the Youth organization to encourage schools with vast pieces of land to pet trees for all their students, pupils and teachers. This would help to set up arboreta at different institutions for future sources of seed and as demonstrations to the youth that it is possible regenerate natural forests. 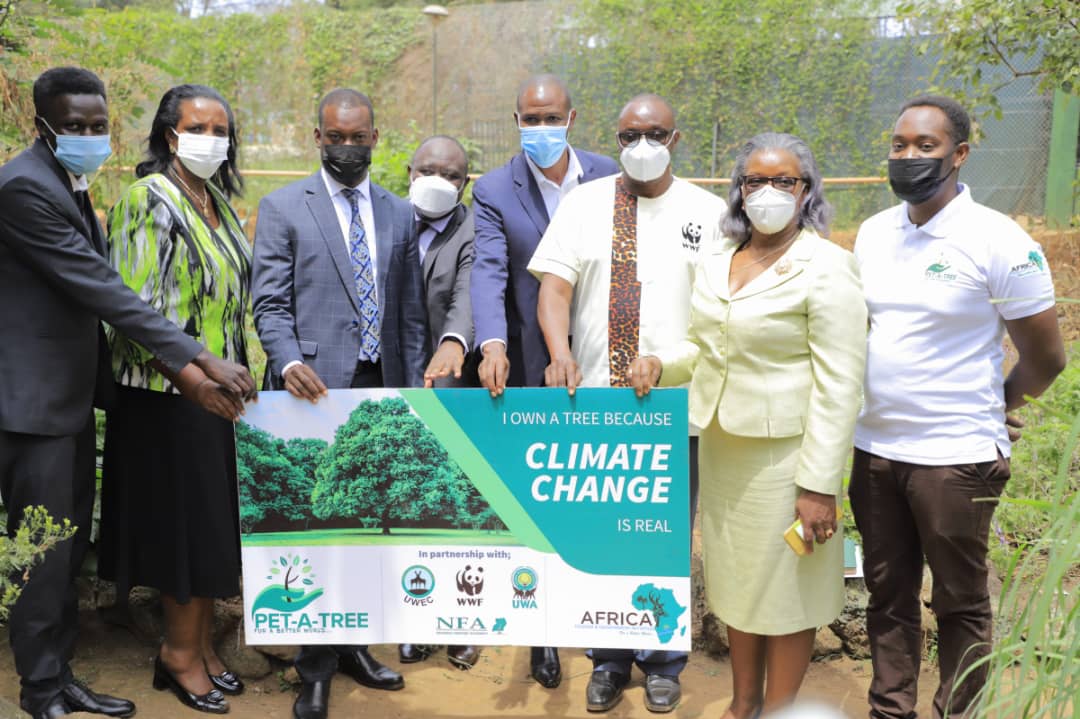 State Minister for Tourism, Wildlife and Antiquities, Hon Bahinduka Mugarra Martin (Third Left) and the WWF Uganda Country Director, David Duli (in WWF branded shirt) pose for a photograph with other officials after the launch of the campaign.